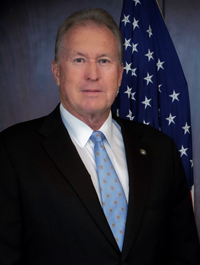 Glen R. Smith was appointed to the Farm Credit System Insurance Corporation Board of Directors and Farm Credit Administration Board by President Donald Trump on December 8, 2017. Mr. Smith is serving a term that expired May 21, 2022.

Mr. Smith is president and co-owner of Smith Land Service, a company he founded in 1982. The company specializes in farm management, land appraisal, and farmland brokerage services, and serves about 30 Iowa counties. Mr. Smith also owns, and serves as president of, Smith Generation Farms, Inc., a family farm operation that encompasses about 2,000 acres of primarily corn and soybeans in western Iowa.

He is a native of Atlantic, Iowa, where he was raised on a diversified crop and livestock farm. His farm experience started at a very early age after his father was involved in a disabling farm accident. He graduated from Iowa State University in 1979 with a B.S. in agricultural business and accepted a position with Doane Agricultural Services as state manager of the company’s real estate division.

In 1982, Mr. Smith and his wife, Fauzan, moved back to his hometown and started farming as well as developing his ag service business. The couple have four grown children and five grandchildren. Their son Peter has assumed managerial responsibilities for both the family farm and business.